The MTB trail National Park Krka is placed along the canyon of Krka river and next to the Adriatic coast in North Dalmatia. The trail leads near the famous waterfalls of Krka river and across the canyon of Čikola river. The most famous waterfalls of Krka river are Skradinski Buk and Roški Slap. Near the trail there are famous Visovac Lake (Visovačko Jezero) and Ključica fortification too. The complete trail is dry and rocky. There are few steep and rocky ascents & descents. During summer, spring and fall many people hike on the trails near the waterfalls. Do not ride on this short sections. The entrance fee is charged in National Park Krka. Due to many unlabeled junctions the GPS unit with the uploaded route is a must for fast and safe navigation.

Getting there: Europe, Croatia, Šibenik, Skradin.


Notes & references:
The entrance fee is charged in National Park Krka. There are 3 check points: Lozovac, Skradin and Roški Slap. During summer, spring and fall many people hike on the trails near the waterfalls. Do not ride on this short sections. The National Park Krka staff can forbid the ride in this zone! I recommend to visit this places by bike during winter time and in small groups or individually only!

Regarding possible mine fields on the section Rupe – Kistanje Plateau on the right side of the carriageway there are labels of the hazardous area.  Keep the ride on the carriageway only! On this section do not ride off the trail!

GPS unit with uploaded route is a must. 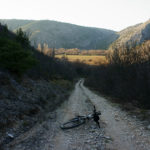